Peacock’s Unconvincing Barney Documentary, “I Love You, You Hate Me,” Reviewed. 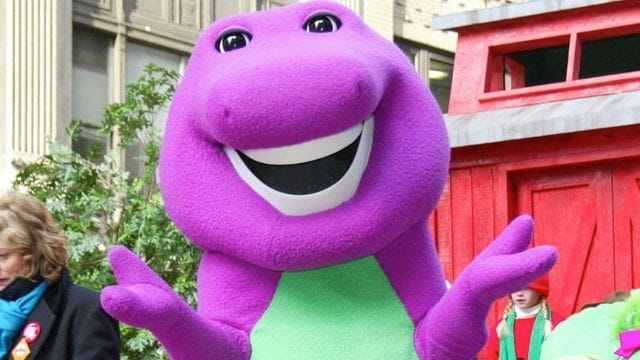 “It should go without saying that I’m not suggesting that those who despise a character from a children’s television show are in any way comparable to those who have accepted the things that I have embraced,” she said. “However, the dynamics of basing your identity on what you loathe and what you despise are precisely the same,” she contends. “Those dynamics are exactly the same.”

It’s a point that may be debated, but it’s also provocative, and it’s presented in language that are paradoxical and, in the end, not justified very well. Because of this, it’s perhaps the best way to sum up Tommy Avallone’s documentary.

I Love You, You Hate Me doesn’t want to be anything more than a phoney celebration of 1990s nostalgia, which is something that I really like, but it doesn’t quite have the intellectual weaponry to make its more ambitious claims successfully. I Love You, You Hate Me is a documentary that probably won’t inspire either extreme in its title, so it will be up to viewers to decide whether the failure to thoroughly explore its biggest contentions makes the film borderline offensive — once you’re paralleling Barney haters with the white supremacist march in Charlottesville, that line is really blurry — or just flawed, on top of a clumsy structure and major sourcing problems.

To refresh your memory, Sheryl Leach first conceived of the concept of the universally loving (not to be confused with universally loved) Barney in the year 1988. In 1992, PBS affiliates introduced the series to a wider audience, which catapulted the character to the status of a worldwide phenomenon. Barney and Friends aired for a total of 14 seasons and became an instant classic because to the show’s diverse cast, infectious melodies, and relentlessly upbeat and repetitive theme.

At the same time, it resulted in a strong backlash, was the object of derision and abuse, and gave birth to urban legends about a so-called Barney Curse that are quite clearly bogus, despite the fact that the Leach family faced disproportionate disaster.

I Love You, You Hate Me is an attempt to carve out a niche for itself in two of the most common and nostalgia-driven subgenres of documentaries. They belong to completely different genres.

While both are necessary for Avallone’s documentary, the attempt to be both ultimately hinders its effectiveness.

The fact that Sheryl Leach refused to take part is the largest obstacle. Her motivations are clear once you learn about what transpired in her family. But she would be the one to know if Barney & Friends had a deep and significant philosophy. Aside from “Kids adore dinosaurs,” “Kids love love,” and “Kids love repetition,” this article offers little explanations for the show’s enormous popularity.

It’s puzzling that, despite the presence of musical director Bob Singleton, we learn nothing about how the show’s catchy tunes were put together. The presence of David Joyner, who wore the Barney suit for many years, is tainted by the fact that he is being used as a punchline for salacious giggling about his current career as a “tantric energy healer,” rather than the discussion of the qualities of his performance that made Barney so approachable.

From time to time, a remark is made that seems both specific and meaningful, such as when child actress Pia Hamilton reflected on the significance of getting to bring her Filipino heritage to her character. However, most of the time, the audience is treated to the same tired “We were a great big happy family” platitudes.

Everybody appears to agree that Barney & Friends was successful because it openly catered to preschool audiences on their own terms, which made it unusual for a show aimed at that demo to offer anything at all for accompanying adults.

Then, one individual after another is perplexed by the fact that the show’s lessons, which were aimed solely for three-year-olds, both annoyed older viewers at the time and haven’t supplied continued wisdom that has nurtured the generation that previously loved the show. Perhaps nobody here is interested in investigating the possibility of a causal link between the two.

The thing that seemed like a great idea at the time could turn out to be a problem in the future. I’m confused; what does that imply? I Love You, You Hate Me fails to bridge the chasm between blind hatred and insightful criticism. It would appear that either the show was universally beloved or universally reviled for spiteful and childish reasons.

BTS Army Yells as V and Jungkook Rehearse in Busan With Off-shoulder Shirts.

What is Puretoons & How to Use It?