The Philadelphia Orchestra Gives “Dancing on My Own,” the Phillies Postseason Anthem, Another Makeover. 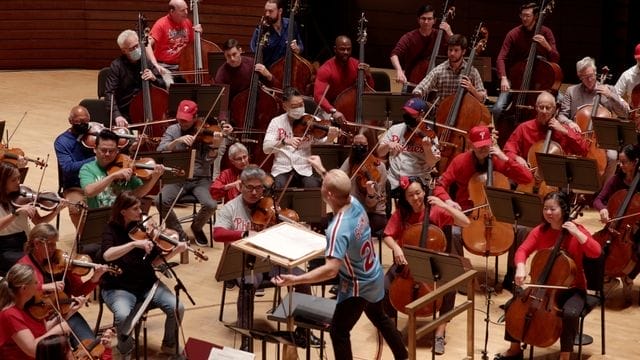 One song, “Dancing on My Own,” the dance-pop lament that became an entirely unexpected playoff anthem, has become impossible to avoid in the city of Philadelphia as the Phillies prepare to play in the World Series. You may have heard the melody in the jubilant footage taken inside the Phillies clubhouse or during the celebration that took place on Broad Street over the weekend. Since this morning, you will be able to hear it performed in settings that are a little bit more formal by The Philadelphia Orchestra.

The video contains only the chorus of the song and includes sing-along closed captioning. It was filmed at Verizon Hall, which serves as the home of the Orchestra. The musicians in the orchestra are dressed in a casual manner, with several of them donning Philadelphia Phillies gear.

The conductor Yannick Nézet-Séguin, who brings the typical level of whole-body involvement to the task at hand, is seen here sporting a throwback jersey of Mike Schmidt’s. (Nézet-Séguin was born in 1975, the same year that the league leader in home runs was Paul Schmidt, who played his entire career for the Philadelphia Phillies.) Everyone yells “Let’s go, Phillies!” as the game comes to a close.

There is no longer any mystery as to how “Dancing on My Own” managed to waltz its way into the affections of sports fans in Philadelphia. This article that was published not too long ago in the Inquirer and was written by Matt Mullin provides extensive detail. For those who prefer a condensed version, left fielder Kyle Schwarber is the one who brought the song to the Phillies clubhouse.

This is a custom that he took with him from his time with the Boston Red Sox and carried over to the Phillies. The version that can be found on the group’s playlist is a Tisto remix of Calum Scott’s cover of the song from 2016; this makes it two steps removed from Robyn’s original rendition of the song.

That version, which was released on Robyn’s album Body Talk Pt. 1 in 2010, carries its own lore. It is considered a gay anthem, a hinge toward communion, and one of the Top 20 songs of all time, at least according to Rolling Stone, which ranked it one slot higher than Billie Holiday’s “Strange Fruit.” There are Robyn fans who have made it a point to advocate for the original version of the song rather than Scott and Tiesto’s renditions, but one can only guess that she isn’t too bothered by this. (A headline that appeared in the Inquirer a couple of days ago read: “Fans of Robyn, don’t lose hope. The Swedish popstar is still being compensated for their contribution to the remix of “Dancing On My Own.” “)

The Philadelphia Orchestra isn’t the only local institution to give the song a new interpretation this week. On Wednesday, for Public Radio Music Day, the Philadelphia brass band SNACKTIME shared its own take on the tune with our friends at WXPN.